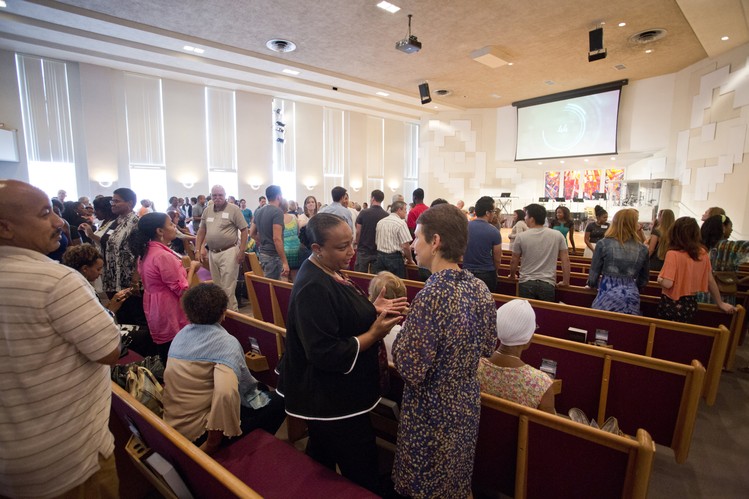 I had a long conversation with a church member not too long ago about a couple of people in their Sunday school class.

All I could say was “We should never do that. It is not appropriate to be making such comments in a Sunday school class or anywhere else for that matter.”

We all know that Jesus was a Jew, yet He was not one who spoke ill of other religions. When confronted by the Centurion who seeks a miracle for his ailing servant, Jesus says “Truly I tell you, I have not found anyone in Israel with such great faith.” Then Jesus said to the Canaanite woman with the demon-possessed daughter, “Woman, you have great faith! Your request is granted.” And her daughter was healed at that moment.

If His Disciples had their way, Jesus would have ignored the woman. They said “Send her away, for she keeps crying out after us.”  He answered, “I was sent only to the lost sheep of Israel.”  The woman came and knelt before him. “Lord, help me!” she said. He replied, “It is not right to take the children’s bread and toss it to the dogs.”  “Yes it is, Lord,” she said. “Even the dogs eat the crumbs that fall from their master’s table.”  This was when the daughter was healed.

Jesus did not demand that people become Jewish before He worked a miracle for them.

When one of the Apostles saw someone casting out demons in the name of Christ, they told Jesus that they tried to prevent him because “he does not follow along with us.” Jesus said, “Do not hinder him; for he who is not against you is for you” [Luke 9: 49-50].

Why do we refuse to see more differences and ignore the similarities? It happens all the time.  Take a diverse group of people and put them in a big room to sit at picnic tables.  What do they do?  Most will gravitate to tables where people who look like them are sitting.  That drives me crazy!  How are we ever going to learn anything about how other people experience life if we just hang out with people who are just like us.

Instead of focusing on differences and similarities, and using such generic terms like diverse, let’s use the word rich. The Christian experience is a rich one.  I have a good friend who just joined the Catholic Church and the proud traditions of the church really appealed to him.  I have another friend who is non-denominational and his services are truly alive with the Holy Spirit.  The music is very lively, people will get up and shout their praises and the singing is in a word, “exuberant.”  My Aunt Babe was a rector in the Episcopal Church and attending her services, one was exposed to a liturgy that was truly poetic and proper in its performance.  I have visited African-American churches that are so supportive of the preacher, their shouts of encouragement are uplifting and you never fear that they are not listening.  The shouts always come at the right places because they are engaged with the message.

Jesus assured that where two or more are gathered in His Name, He is with them [ Matt. 18:20].

He did not say two or more Jewish people, or Catholic people, Baptist people or United Methodist people. He said PEOPLE.

Pastor Hamilton says in Seeing Gray in a World of Black and White:  “The truth is that all of the branches in this tree called Christianity are a bit defective.  But each adds to the beauty of the whole.  What a tragedy if we were to cut off all but one of the limbs.  But what riches are to be found if we can humbly listen and learn from one another, appreciating our differences, while together seeking to follow Jesus Christ.”

2 Responses to Our Rich Experience…