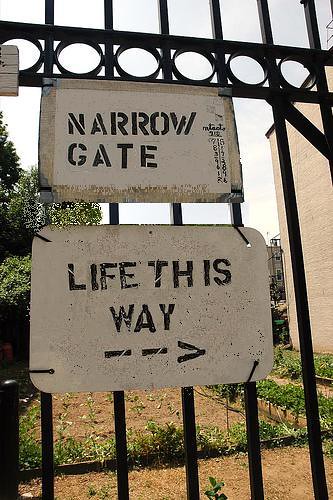 When I began to write about Adam Hamilton’s book Seeing Gray in a World of Black and White, I knew it would be tough.  The book deals with controversial issues throughout, issues that divide people and issues that can divide the church.

One of the most difficult issues for me to write about is Chapter 12’s topic “Will There Be Hindus in Heaven.” The first sentence in the chapter sets the tone:  “Will there be Jews, or Muslims or Hindus in heaven?”  Quickly Hamilton maps out the positions of the extreme points of view:  the conservative Christian says “of course these groups won’t be in heaven.”  The liberal believes that all persons will ultimately be welcomed to heaven.

Ok, why is this so difficult for me to write about?

First of all, it calls upon me to have a broader knowledge of other faiths; I am not an expert on any religion, but I surely am not an expert on the Jewish faith, the Muslim faith or the Hindu faith [not to mention Buddhism and Sikhisim]. Add Christianity into the mix and you have the top six in the world.

Secondly, many devout Christians don’t even blink on this question. They just line up with conservatives and say “they won’t be there.”  Waffling against this position is hard.

Thirdly, as I indicated in my last post entitled “Cringe Worthy” we are in the middle of an election season where candidates and political parties are reacting to terrorist attacks and immigration concerns. It seems that most of this negative concern is directed toward Muslim people.

This chapter is slowing down my posts as I spend a lot of time thinking about how I will address this topic.

This may turn you off to Pastor Hamilton but he struggles with excluding people from heaven who have not personally accepted Jesus Christ as their Lord and Savior.

Why does he struggle with this position which is called exclusivism or exclusivity?

Sheer numbers is one reason. Hundreds of millions of people strive to know god [note little g].  They follow him according to what they think is his will.  They have devout prayer lives (putting most Christians to shame).  They try to do the right thing, the just thing.  As Christians Hamilton states “We say that God forms such persons in their mothers’ wombs, knows them by name, loves them, sees and hears every prayer they utter, and surely sees their attempts to do what is right as they understand it.  Is it really the gospel truth that God stands by and watches as they perish?”

Righteousness is another reason. Our Christian God is a God of love, a God of justice and a God of righteousness.  “The image of hundreds of millions who have earnestly sought God being tormented for eternity, whether God sends them to hell, or simply allows them to perish seems neither loving, just or righteous.”

A person’s heart is the third reason. Hamilton refers to 1 Samuel 18 when the Lord says to Samuel, “Do not consider his appearance or his height, for I have rejected him. The Lord does not look at the things people look at. People look at the outward appearance, but the Lord looks at the heart.”  Adam Hamilton believes God looks at a man’s heart.  He says as much in his words, “God can apply these merits to those who love God, seek God and strive to serve God, but who have never heard the Gospel or could not make sense of it.”

On June 28th, I posted comments by Greg Koukl that many Christians would find offensive.  You may have thought “Who is this guy?” when he described Christians as “intolerant, arrogant and narrow-minded.”  He was upset that we practice the idea of exclusivism.

What if we cited someone you knew a little better, someone like Billy Graham? When asked whether he believes Heaven will be closed to good Jews, Muslims, Buddhists or secular people he said “Those are  decisions only the Lord will make.  It would be foolish for me to speculate about all that.  I believe the love of God is absolute.  He said He gave His Son for the whole world, and I think He loves everybody regardless of what label they have.”

So many of us love Billy Graham but as he has aged, his faith has become more solid and his humility has come to the forefront. He knows God but he does not want to presume to know God’s will.   That is not Pastor Graham’s job and neither is it ours.

“Enter through the narrow gate. For wide is the gate and broad is the road that leads to destruction, and many enter through it” [Matthew 7:13]. Graham and Hamilton are not the gatekeepers, swinging it open or shut.

That job belongs to God.

And they know it.