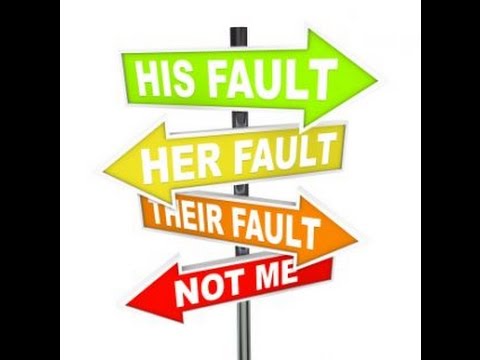 Taking responsibility is hard to do. Shifting blame is so much easier.

To be honest, some have turned shifting blame into an art form.

When a divorce occurs, it is the other person’s horribly irritating faults that have caused the problems. When a person strays away into an affair, it was caused by the other person’s neglect or the other person’s boring behavior. Naturally when an attentive, exciting person comes along, the new chance at a better relationship makes sense. When someone turns to alcohol, maybe someone has been so cruel to them that drinking is the only way to cope. The bottle is the crutch that is needed to help one get through the day. The list can go on and on. Everyone is blamed except the person who really deserves the blame…the person who committed the act.

To this end, Pastor Bevere concludes Chapter 8 with a Biblical contrast illustrating the power of taking responsibility: David vs. Saul.

I have seen a man cry as he confessed his sin. When a man takes total responsibility for a mistake, it can be tough to watch. David knew he had sinned and he cried out in his pain. In my experience, it is so uncomfortable to watch someone do this that the natural response is to try to get the repentant person to admit that it was not totally their fault. I think the goal of that is to get them to calm down. I know the “natural response” is something we may feel compelled to do but on the other hand, there is something extremely admirable about a person who has taken responsibility. Tears are probably symbols of honest contrition. They help relieve the sinner of their grief. They humble the sinner and set them up to actually get past the sin and experience some degree of reconciliation with God.

Read the words of King David in the book of Psalms as he cries out in his grief. He has hurt his relationship with God and he knows it. He has committed adultery and murder. “Against You and You alone, have I sinned; I have done what is evil in Your sight” [Psalm 51:4]. David is expressing truth and it is hard to read.

A contrast to David is King Saul. Saul had a need to be powerful in the world. He had a lavish lifestyle and a terrific sense of pride. When God gave Saul specific instructions, he decided to do what he wanted. God asked him to exterminate the Amalekites. The instructions were explicit: don’t just kill the men, but the women and children also, and even the cattle – spare nothing and no one. Saul, in his pride, kept some of the booty from his military exploits. He disobeyed God.

Saul knew he had displeased God but he does not seem as repentant as David. Some people handle their sinning like Saul. They are less concerned about the sin and more concerned that they have been caught sinning. They are embarrassed by the public exposure. Of course, if they had not been caught, everything would be ok. Sin unexposed is not sin.

What is the message of this contrast? Maybe it can best be summed up in the Scripture from 2 Corinthians 7:10: “For the kind of sorrow God wants us to experience leads us away from sin.”

God knew Saul’s sorrow was not going to do that and God removed him from his kingship. David’s sorrow was genuine and heartfelt and he was restored.

Since Pastor Bevere is writing about our tendency to fall in love with worldly things, what is the point that he is trying to make about responsibility? As Christians, we need to own up to our failings in this regard. To use a trite expression, “we can’t have our cake and eat it too.”

Simply put, he says “friendship with the world affects our experiential relationship with God…substituting good for God has cost us greatly, both on the personal and the corporate church level.”

Shifting blame is not the way to handle sin. Taking responsibility is hard to do but it is best. Expressing truth is so hard to do sometimes but restoration is what we want…not removal.