The Gift of Prophecy… 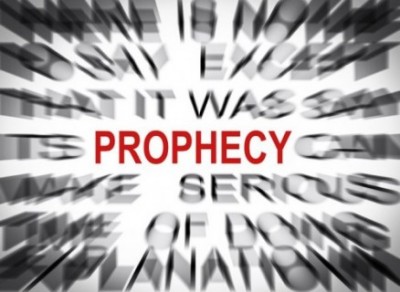 “Your word is full of fulfilled prophecy. You told things before they happened so that when they did, people would believe” [John 14: 29].

After discussing the gift of apostleship in the previous post, let’s look at other spiritual gifts listed in Ephesians 4 by the Apostle Paul.

One such gift is the gift of prophecy.

Like apostleship, the gift of prophecy is open to debate in today’s church, some believing that the gift exists; others thinking that evidence of prophecy is probably rare. Billy Graham says he is aware of “rare instances” in which Christians believe they have been given foreknowledge about future events. For example, he cites an 18th century missionary who prophesied that a ship loaded with food would arrive and it did just before people in a settlement were about to die from starvation. Many feel that was true prophecy.

He does not say “no” to prophecy today. He just says that examples of contemporary prophecy are “not ordinary and frequent.”

The word “prophecy” comes from the Greek word meaning “public expounder.” He explains that in apostolic times the gift of prophecy had two parts. In this post, I will concentrate on the first of two meanings of the word prophet.

In apostolic times [meaning between 30 AD and 100 AD, the ministry of Jesus and His immediate followers] prophecy meant “one concerned [with] the communication of words from God to men, through the prophet.” Note how Graham comments on this prophetic gift. “The gift of prophecy in the first sense, that of foretelling or predictive prophecy, no longer exists to the extent it did in first century Christianity.” I would ask you to concentrate your attention on the phrase “to the extent.” He is not saying that the gift does not exist, but it does not exist as much as it did in the past.

I would be remiss if I did not explain that the gift of “public expounder” had an accompanying gift that is given to the receivers of the “expounding.” God gives the gift of discernment to the receivers of the prophecy. Why is that important you might ask? The reason for the need for discernment arises from the existence of false prophets. Jesus warned us that “false Christs and false prophets” will come and will attempt to deceive even God’s elect (Matthew 24:23-27; see also 2 Peter 3:3 and Jude 17-18). The best way to guard yourself against falsehood and false teachers is to know the truth. To spot a counterfeit, study the real thing [the Bible]. Any believer who “correctly handles the word of truth” (2 Timothy 2:15) and who makes a careful study of the Bible can identify false doctrine. Graham states “The very fact that a prophet spoke by revelation virtually assured the existence of false prophets, too, as we note from both Old and New Testaments.” New Testament Christians were told not to despise prophecy but were told to test all things.

Scripture plainly teaches that discernment is a gift that will be useful as we approach the end of the age [the final days when Christ comes and we see the commencement of the next dispensation. It is the period that precedes the second coming of the Son of Man as the Righteous Judge]. At that time, many false prophets will appear, many of them will be “wolves in sheep’s clothing.” Their purpose is to fool God’s own people. The Apostle Paul was concerned about the Corinthians because they seemed to have little discernment, welcoming anyone as the prophet of Christ. He writes “For if someone comes to you and preaches a Jesus other than the Jesus we preached, or if you receive a different spirit from the one you received, or a different gospel from the one you accepted, you put up with it easily enough . . . such men are false apostles, deceitful workmen, masquerading as apostles of Christ” [2 Corinthians 11:4, 13].

It goes without saying that it would be best if every Christian were discerning, but that is probably expecting too much. Graham says “every Christian should be rooted in the Bible, and he should know what the Bible teaches” [180]. Sadly, many Christians today own a Bible but they rarely open it, much less study it.

High standards indeed, but maybe appropriate for a spiritual gift that can influence so many Christian believers.